Contemporary Issues in the Law of Treaties 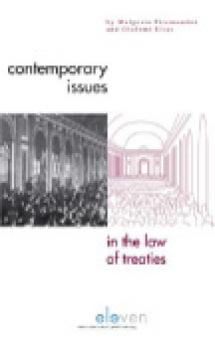 This book is a collection of essays dealing with issues of contemporary significance in the law of treaties. It neither purports nor aspires to provide a general overview of all aspects of the law of treaties, and it is by no means intended to be a comprehensive textbook.

The discussion of the subjects selected in this book will shed some light on a number of areas of the contemporary law of treaties, and, consequently, on some important features of the international legal system at the beginning of the twentyfirst century.

The relevance of the rules governing the law of treaties for other central fields of international law continue to be the subject of frequent doctrinal discussion. In addition, some rapidly developing newer areas of public international law, which are regulated for the most part by treaties, have renewed the importance of some older problems, for example, the question of conflicts between treaties regulating the same subject-matter and the matter of treaty interpretation. One other important issue is the relevance of the emergence of new actors and factors, other than states, in the international legal order in general, and in the law of treaties in particular.

The topics dealt with in this book are: the character of treaties, interpretation, material breach, fundamental change of circumstances, optional clause, and method of expression. Extensive attention is given to multilateral environmental agreements. The recent jurisprudence of the ICJ, which contributed to the development and clarification of a number of aspects of the law of treaties, is also covered, in particular the Gab?íkovo-Nagymaros case and the Bakassi Peninsula case.

Reviews 'Contemporary Issues in the Law of Treaties'